Diamonds suffer defeat on new track, but changes are promised

The Newcastle Advance Fire and Security Diamonds in association with SecuriCorp returned to Brough Park last night in SGB Championship action on a fresh new track surface which looked the business in time for the visit of the Redcar Bear. The home side were again without Paul Starke who had again aggravated his wrist injury earlier in the week, with rider replacement covering his races.

After the match’s far from ideal result, Newcastle club owner, Rob Grant addressed the crowd and said: “I have to apologise for that result tonight. It was totally unacceptable, but I can promise our fans that we’re on it and I’ll guarantee before the next home meeting in two week’s time, we will have at least one new face in the side. We’re not done with 2022 and we will make it better.”

Bradley Wilson-Dean is still absent with his long-term shoulder injury, with Newcastle’s favourite guest, Kyle Howarth of the Leicester Lions accepting the booking at number one for the Diamonds, coming out in in Heat One alongside Matthew Wethers, but it was Charles Wright who took the win for the Bears in the fastest time of the season, ahead of a hard challenging Wethers and Howarth in third, sharing the heat 3-3, somewhat hiding the complexion of the rest of the match resulting in a club home defeat record score line.

Heat Two was stopped on the third bend when Jordan Jenkins went in under Lee Complin, with the Diamonds’ man going down into the fence and it was the home man whom the referee excluded from the re-run, in which Jason Edwards from the gate in the same time as Heat One, 63.4, ahead of Jenkins in a Bears’ maximum 1-5, putting the visitors into a four-point lead, 4-8.

The third heat was a straight 1-5 for Kasper Andersen and Erik Riss in yet another fastest time over James Wright, and then with a Redcar 2-4 coming in the fourth from a solid win from Jenkins well ahead of Wethers who held Lewis Kerr into third, but with four heats gone the score was 7-17 to Redcar, but the good news was that the track was in superb and riding well.

Before the fifth race news came from the pits that after a tight first bend tussle with Kerr, he had caught himself and needed medical attention with all fingers crossed he would be able to continue the match. but was subsequently withdrawn with a foot injury.

Heat Five saw a rare Newcastle success with a home 4-2 won magnificently by Clegg, but Heats Six, seven and, eight were all decisive 1-5s to the Redcar Bears, although James Wright and Complin made life tough for second placed Roynon who defended well, however with eight races run, the Diamonds now trailed their North East rivals by 20 points, 14-34.

Heat Nine looked early on like a 5-1 go the Diamonds, but Clegg, battling with Edwards went down on the third bend and again the Newcastle man was excluded from the re-run, in which James Wright was passed by Edwards on bend two and left for one point as Kerr led for a huge win and another Bears’ 1-5, taking the score to 15-39.

Following a 2-4 in Heat 10, won by Riss over Howarth, Heat 11 only lasted 30 metres as Complin and Jenkins got locked together, crashing heavily and Complin excluded from the re-run in which Howarth briefly led but was passed on bend two by Charles Wright in another Redcar 2-4 sealing their match win with the score now 19-47.

Riss was dominant in the 12th to pass James Wright and win well in the 2-4 that tipped Redcar over the 50 mark, 21-51, before Complin took a third exclusion in Heat 14 when he seemed to get grip on bend two and take his own teammate, Clegg out. The race needed a re-run which ended a 2-4, and with James Wright crashing out of Heat 15, the final result at 28-62, and a night to forget pretty darned quickly for Newcastle.

Redcar team manager, Jade Mudgway was full of praise for his team and the Newcastle club saying: “Congratulations to Newcastle for putting in a huge amount of work into this track which is in excellent shape now. They’ve worked so hard, and it shows. Our lads really took to it and gave us a night to remember at our local rivals.”

Newcastle co-promoter, Dave Tinning said: “This was the most disappointing night for us since I got involved with the promotion by a long, long way. There’s so much time and effort goes into prepping and running a meeting, and then its gutting for a result like this .

“We will be looking to make team changes as soon as possible as tonight, quite frankly, was not good enough!” 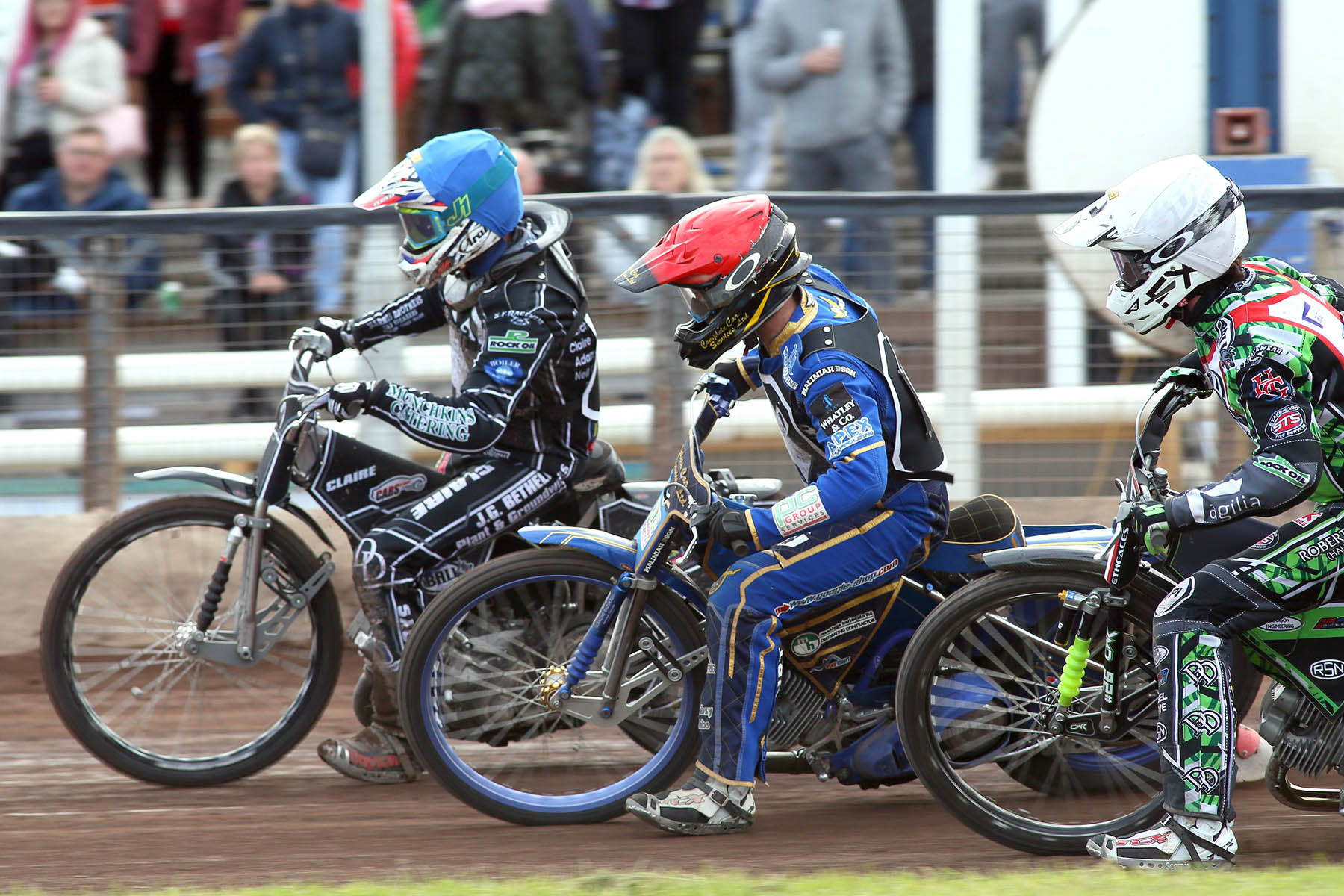 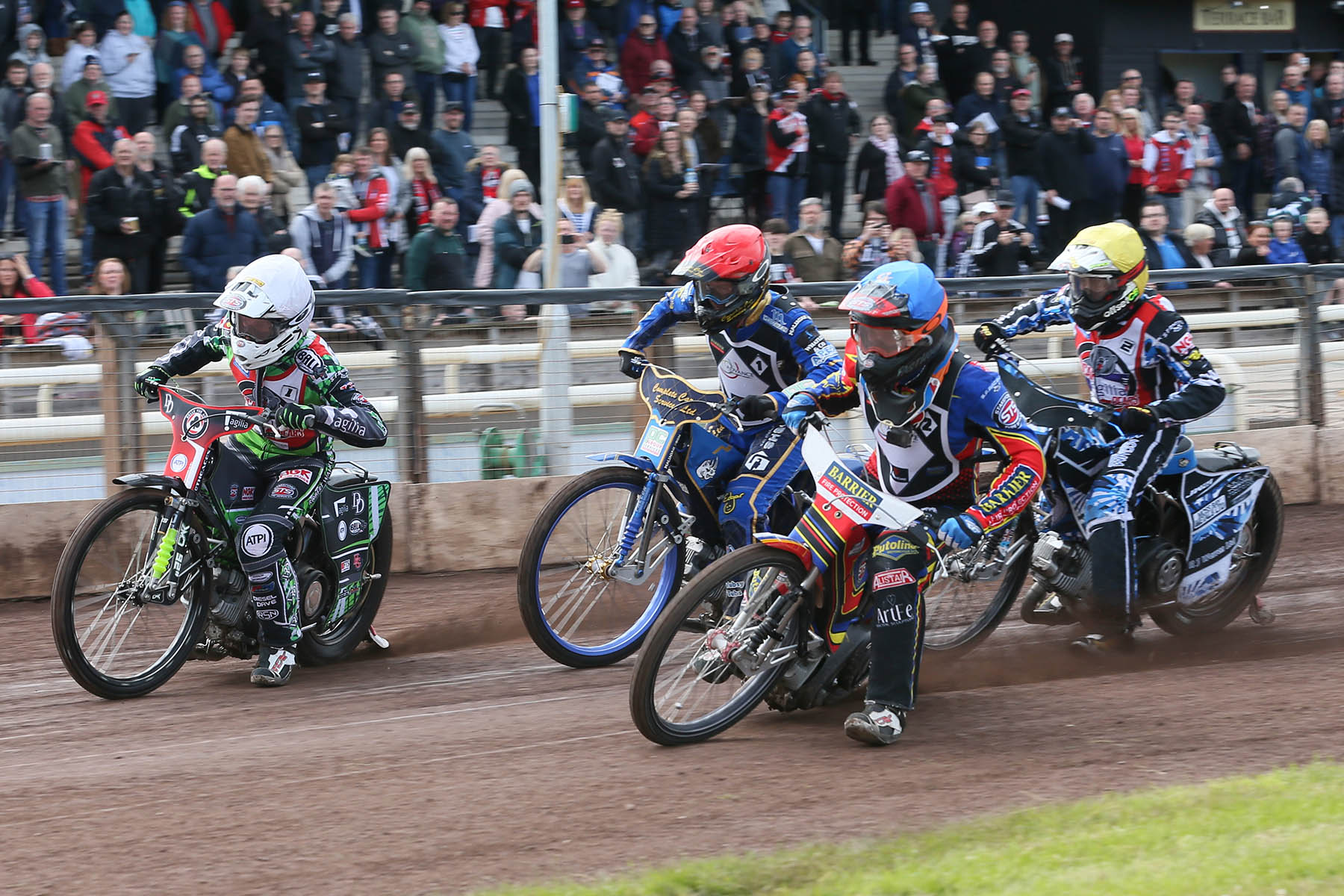 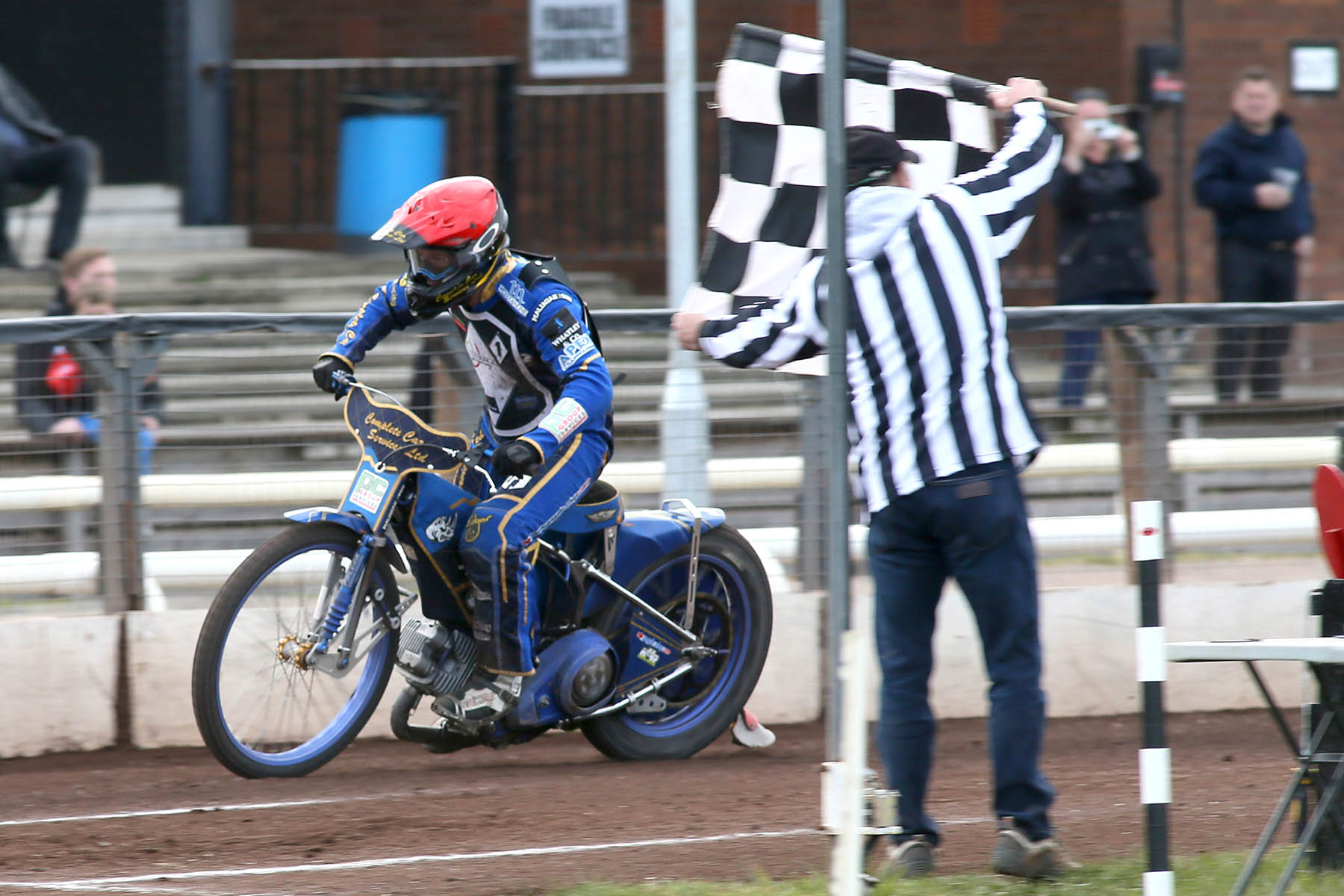 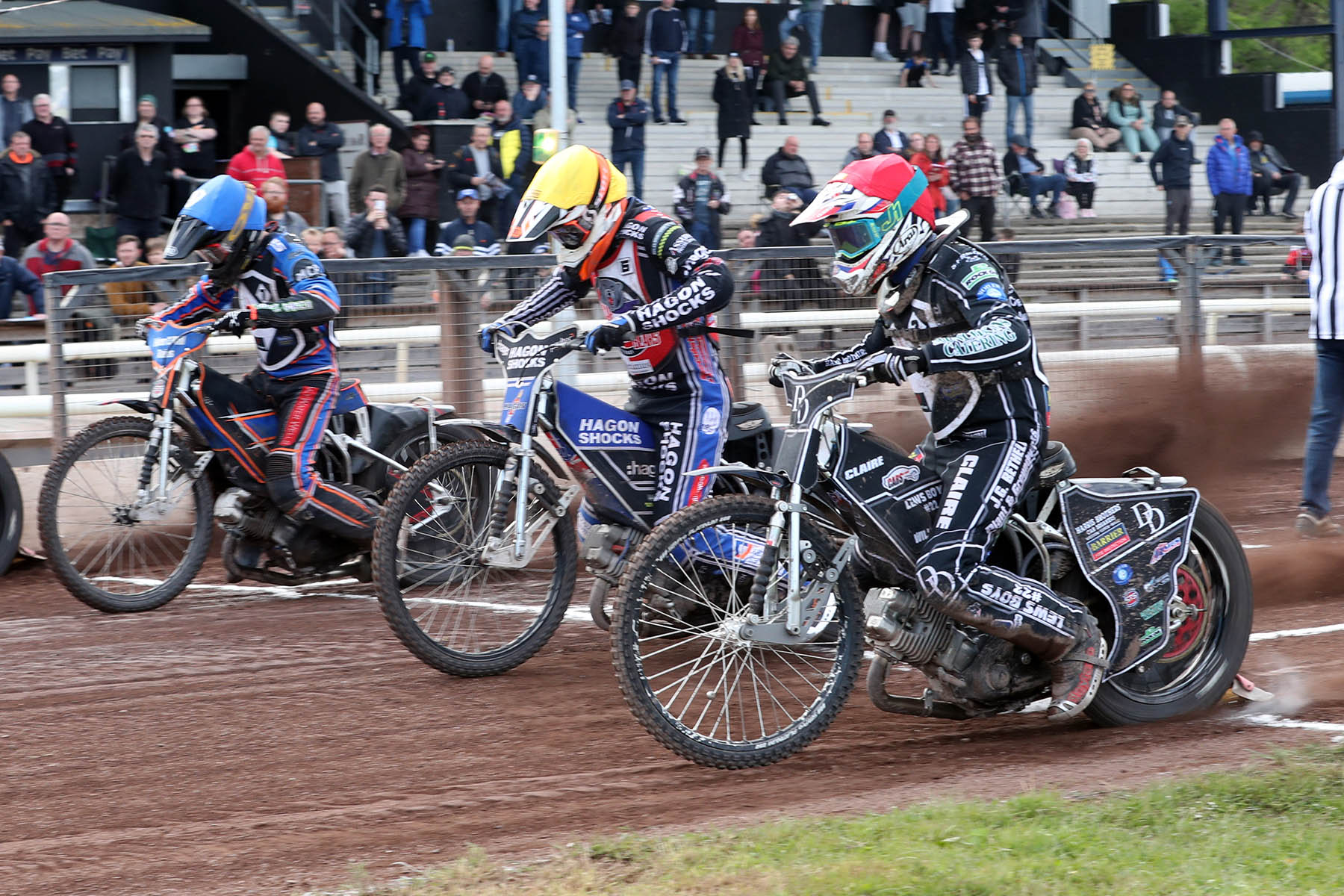 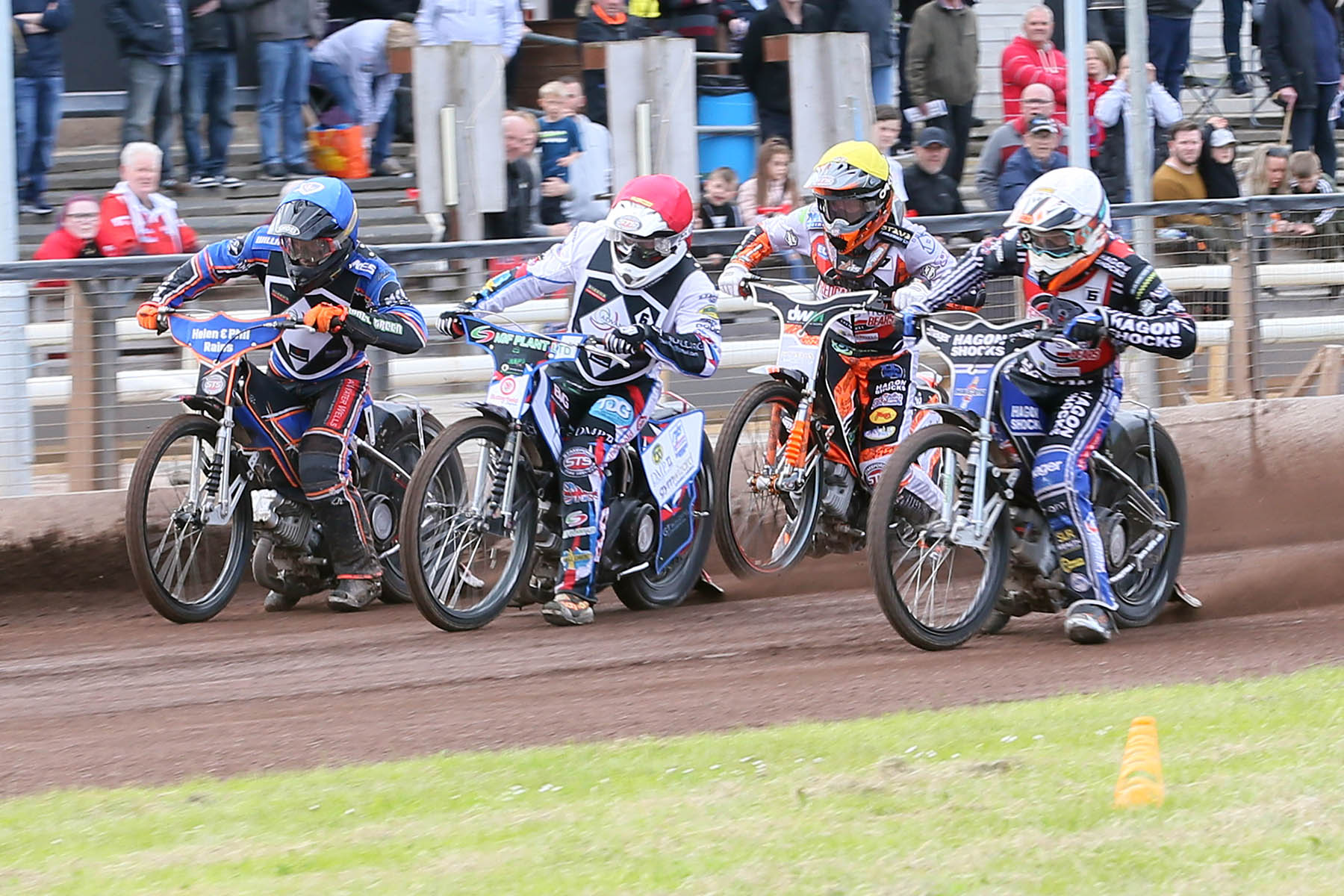 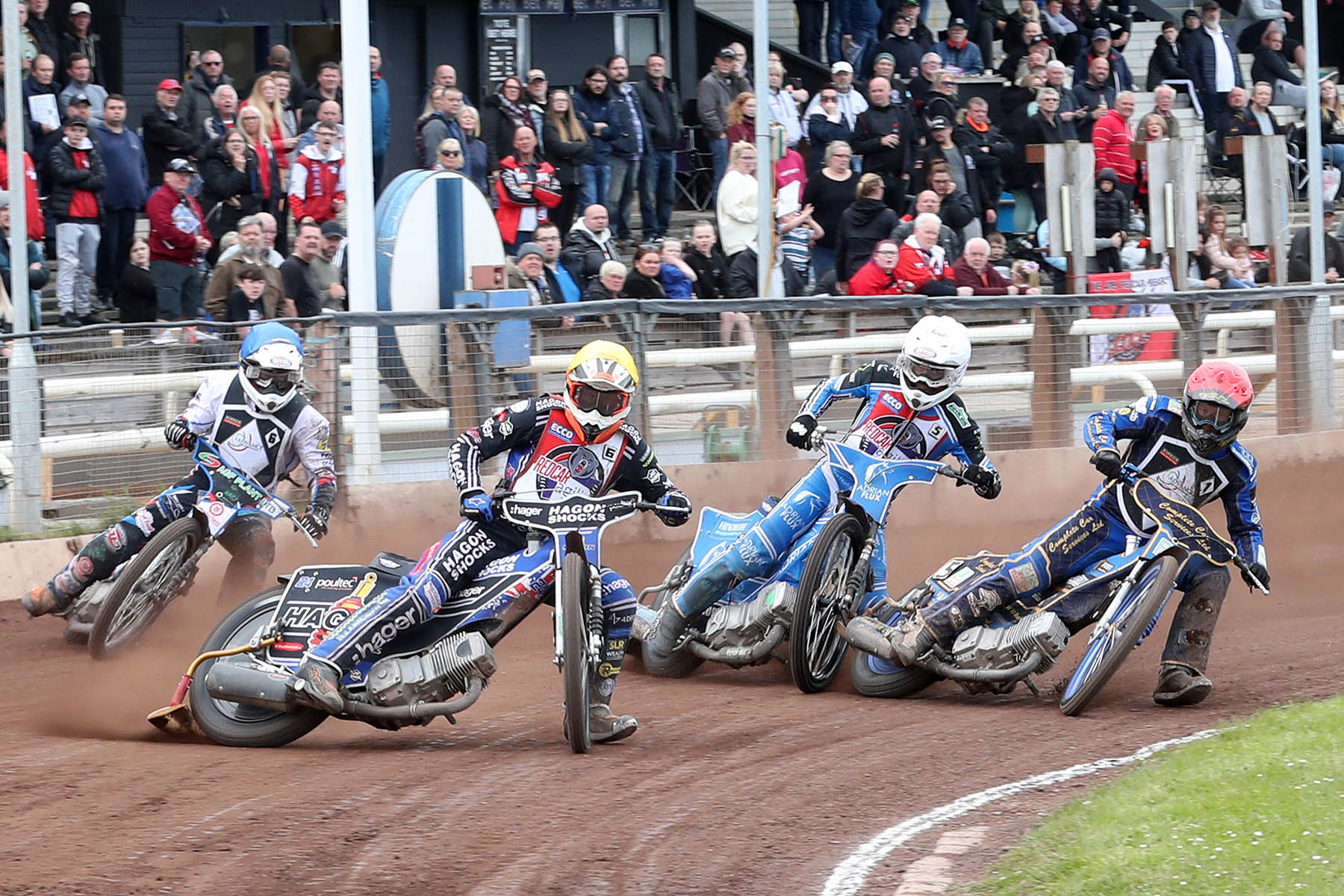 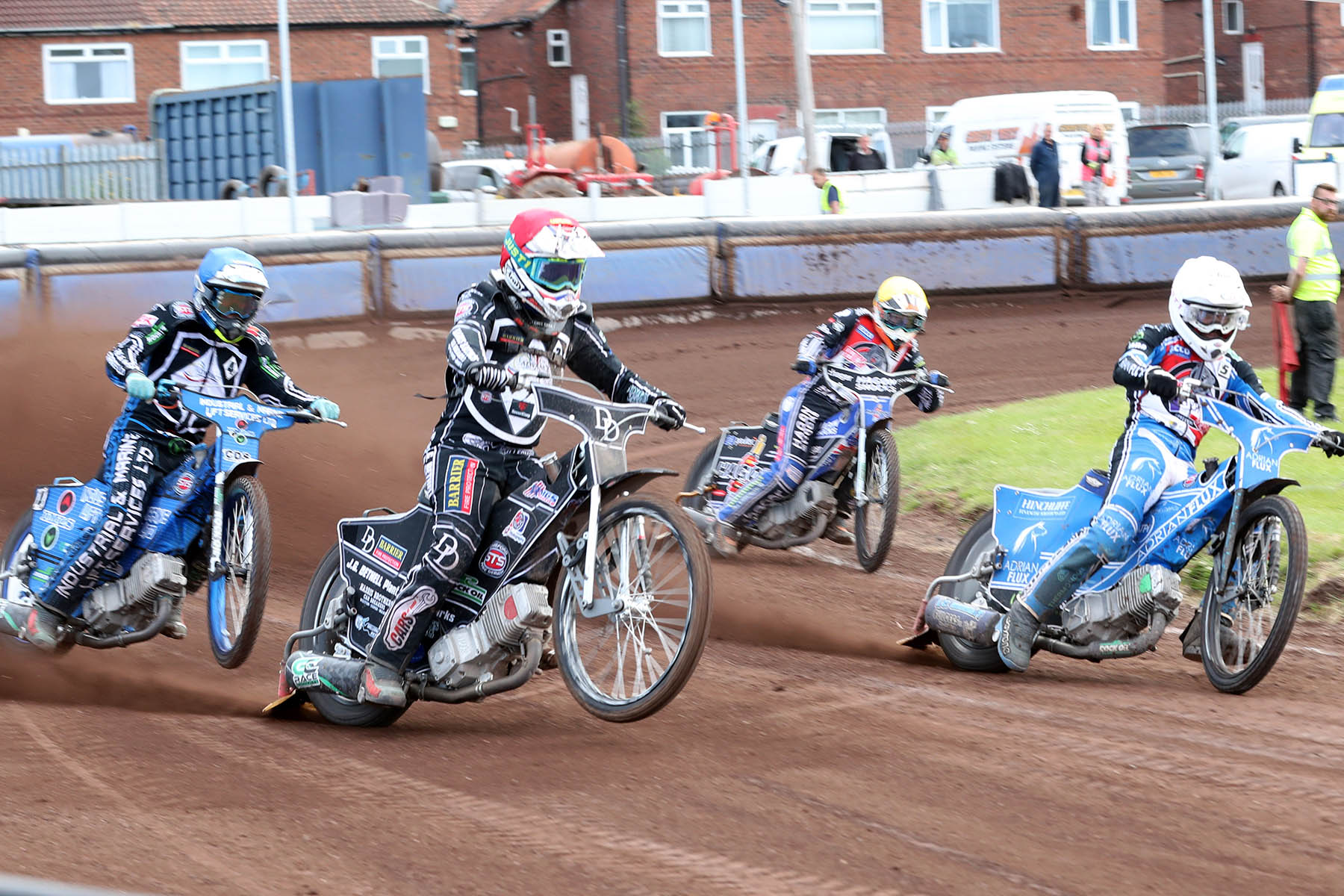 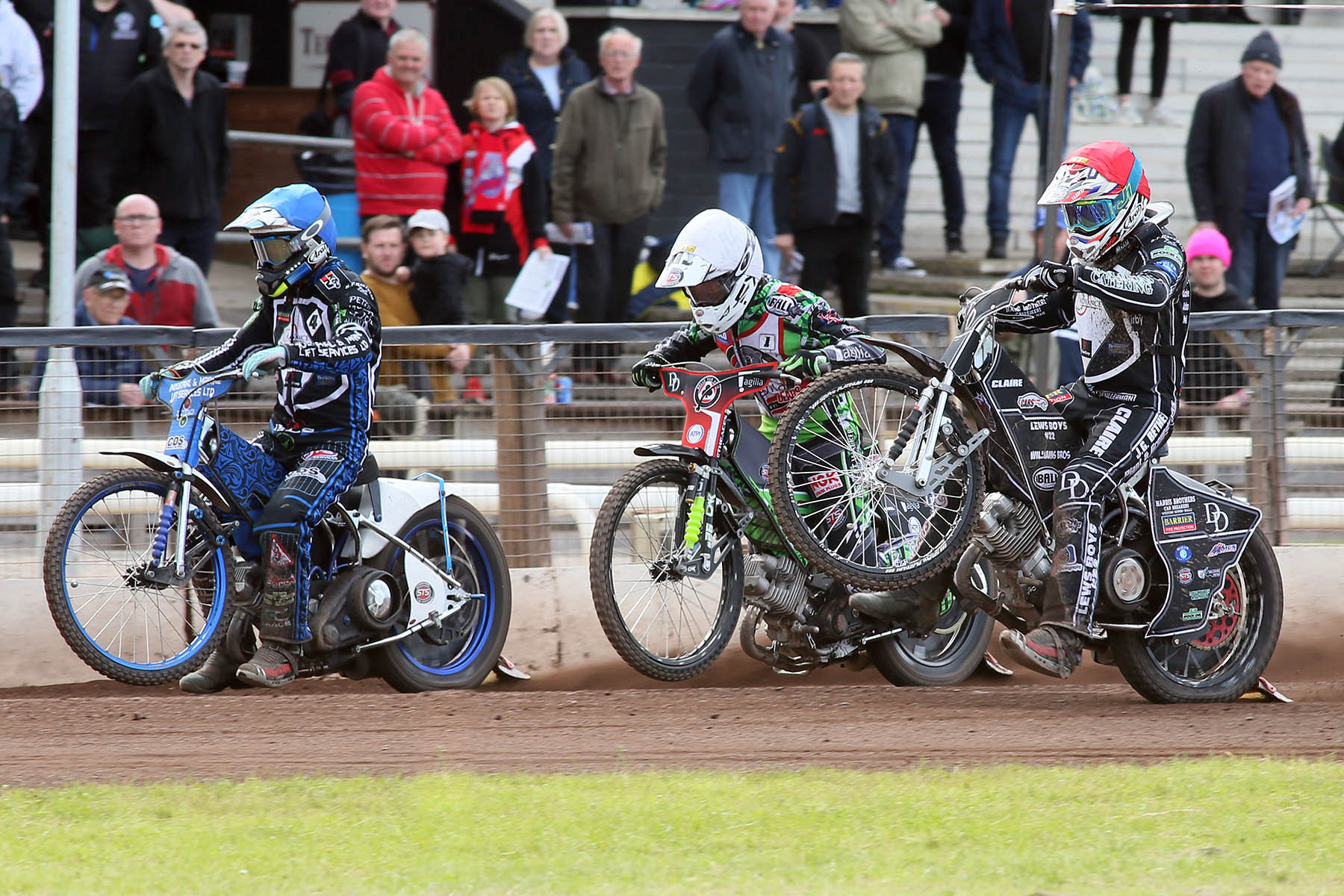 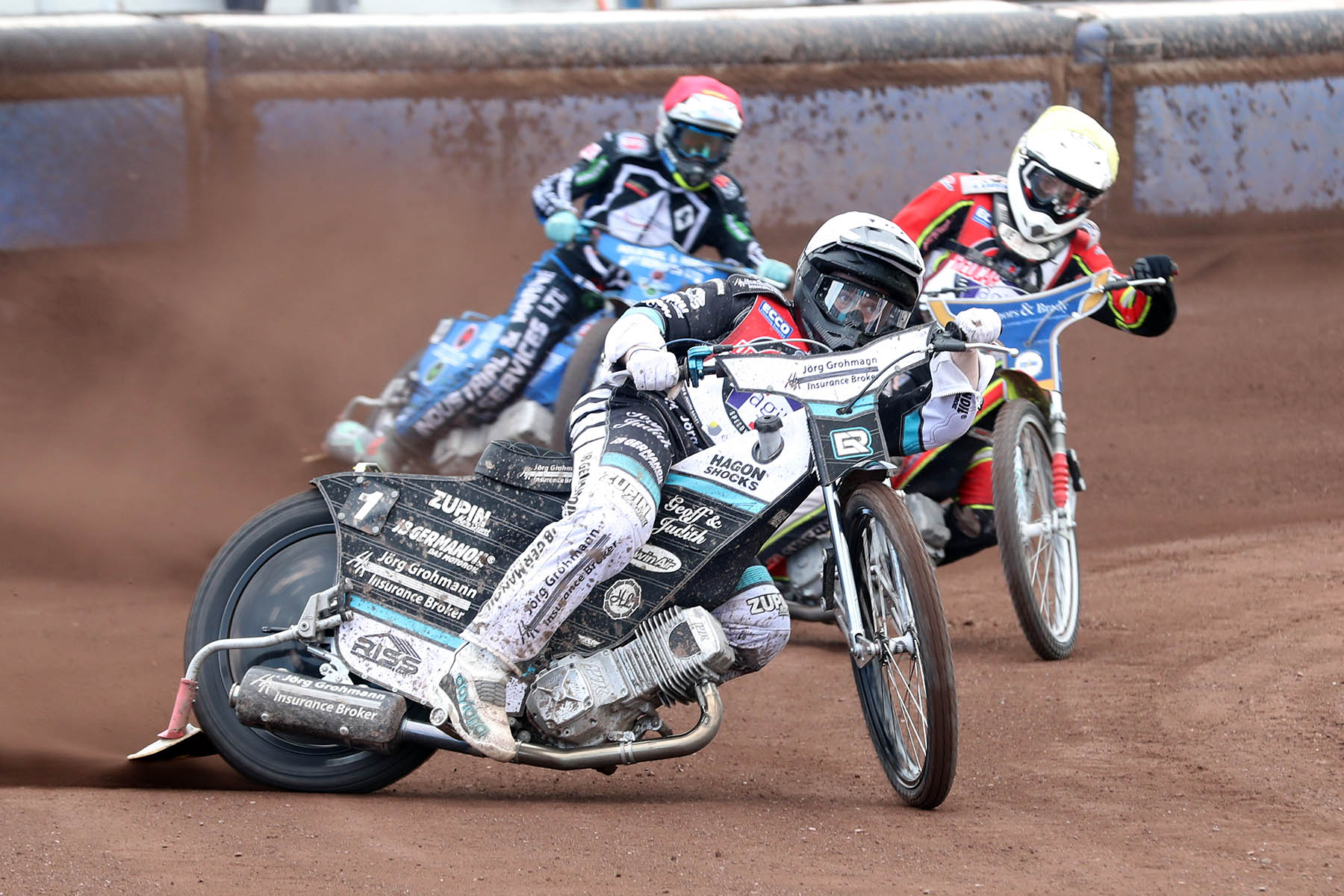 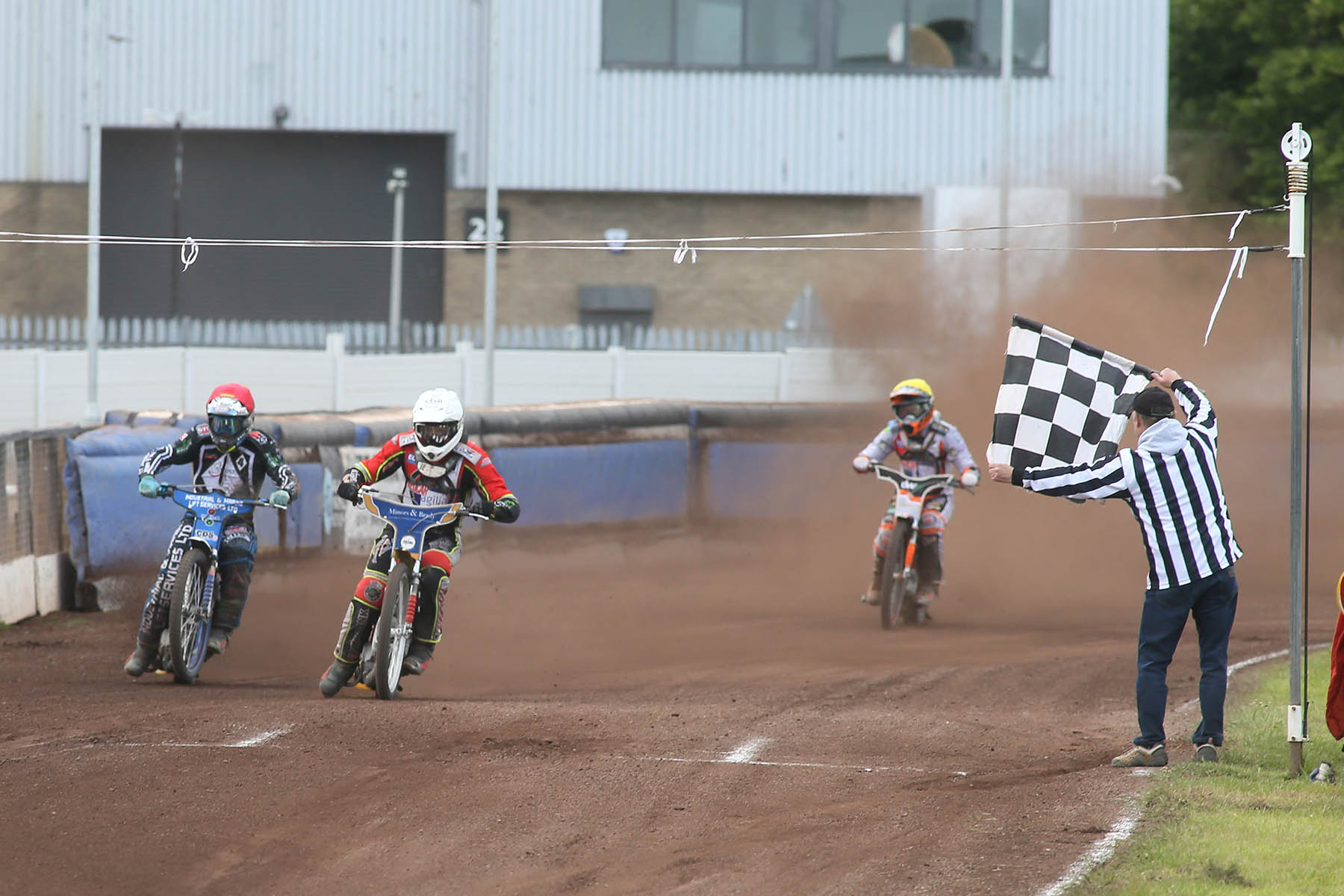 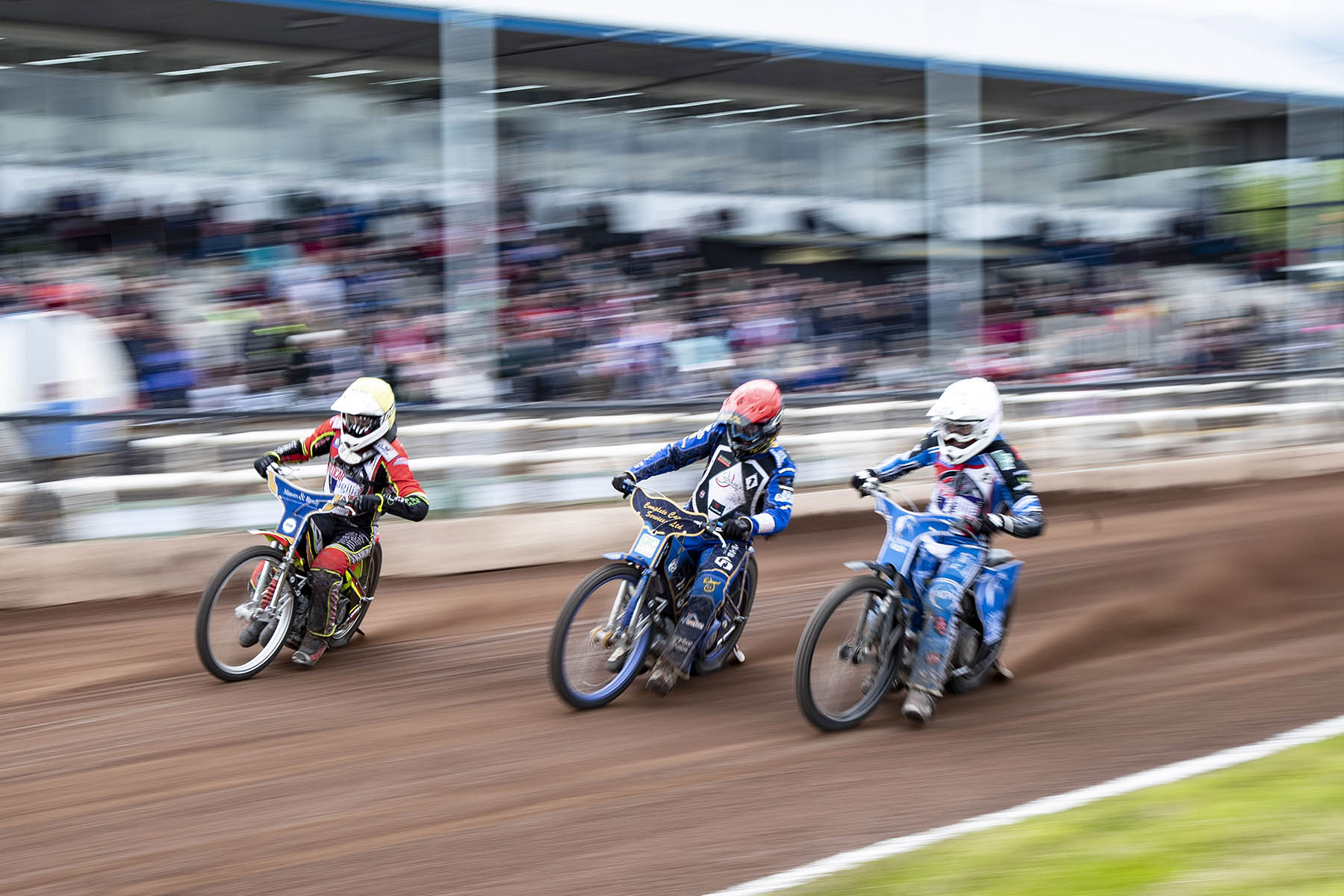