Newcastle Advance Fire and Security Diamonds in association with SecuriCorp: 36

Berwick FTS Bandits Powered by Keenwood Karpets and Newcastle Advance Fire and Security Diamonds in association with SecuriCorp lined up against each other for the first time of two meetings in under 24 hours last night at Shielfield Park (Part Two comes at 4.00pm Sunday at Brough Park) in the SGB Championship for a weekend of tense local derby speedway action with Newcastle boasting several former Berwick riders, Matty Wethers, Paul Starke, and Lee Complin, one of the most exciting Bandits of all time.

Their former Berwick lads did the trick as Newcastle hit their best away performance of the year and provided some great moments for the decent sized crowd to enjoy on a night which saw light rain fall all meeting long but didn’t dampen the action on the track with Berwick’s Chris Harris and Newcastle’s Lee Complin blasting millimetres off the second bend fence with some breath-taking racing.

Harris made a fantastic gate in Heat One to lead the fast-looking Ulrich Ostergaard and held him well to the end of the shared 3-3 race before Jye Etheridge and Kyle Bickley roared ahead of Complin to take a Bandits’ 5-1, despite Complin getting faster and faster chasing in third place, the score at 8-4, before James Wright’s bike looked to shed a chain at the start of Heat Three, ending his race ass Theo Pijper and Leon Flint took the five over Max Clegg taking the score to 13-5.

Starke and Complin showed just how much they loved their time at Berwick by barnstorming Heat Four well ahead of Ricky Wells and Bickley in a 1-5 result, narrowing the gap to four points, 14-10 before Pijper fell on the third bend after a great battle to be excluded from the re-run in which Flint flew round Ostergaard on bend two to lead his opponents standing in a shared 3-3.

Berwick then hit two more excellent 5-1s in the next two races, before Proctor roared round to take the lead of Heat Eight over Complin and Wethers before Ostergaard followed his partner Starke for an early 1-5, but firstly Flint took the wide line to pass Ostergaard as did Pijper a lap later, but after the heat was over, a 3-3, the two Bandits congratulated each other down the back straight but tangled and fell heavily. Pijper was up quickly and walked back to the pits, but Flint took longer to rise, complaining of arm, shoulder, or wrist pain with his future in the meeting in doubt.

Clegg was well and truly out of the gate first in Heat 10 but was soon at the rear with Harris and Proctor leading the way well, and despite a last bend lunge from Wright who tried a pass on Proctor, however the maximum put Berwick into 38-22 lead, which extended to 42-24 after Etheridge and Wells took a solid 4-2 in Heat 11, split by Ostergaard, but that four points gave the win to Berwick.

Wright and Complin over-powered Pijper and Bickley in Heat 12 to hit home Newcastle’s second 1-5 maximum of the night taking the scores to 43-29, however Heat 13 reversed that with Harris, scraping the boards, and Wells keeping the hard-chasing Starke and Ostergaard at bay and extending Berwick’s lead again to 48-30 before Complin twisted his throttle to full-bore in Heat 14 fired up, looking for a win and shot round Berwick’s previously unbeaten Etheridge, and hold him there to the flag.

Gary Flint, Berwick’s team manager and co-promoter said afterwards: “All credit to all 14 riders tonight for getting on with the job in hand with the light rain and put on a great show of speedway. We knuckled down to the job of winning, but perhaps Newcastle were a tougher set of opponents that many had expected, but as a team, we fight hard and did the business to take all league points tonight, and on Sunday we’re out to pick up more on Tyneside, although with that very odd situation after Heat Nine, we may have to work on running minus Leon.”

Newcastle’s co-promoter, Dave Tinning added: “We rode well tonight and congratulations to the lads. It was our best away performance of the year and it showed with some determined riding from some the Diamonds. Lee Complin was excited to race at Berwick again, a track he excelled at a decade ago, and loved every second of his racing tonight. He soon remembered the fast lines round Shielfield taking that scary wide line off bend two to great effect and Paul Starke too was a real Berwick hero in his day. So, yes we were beating by 18 points, but fair to say we were worth a lot more that that tonight and were the highest scoring visitors at Berwick this season so far, and that can’t be bad!”

Newcastle Advance Fire and Security Diamonds in association with SecuriCorp 36 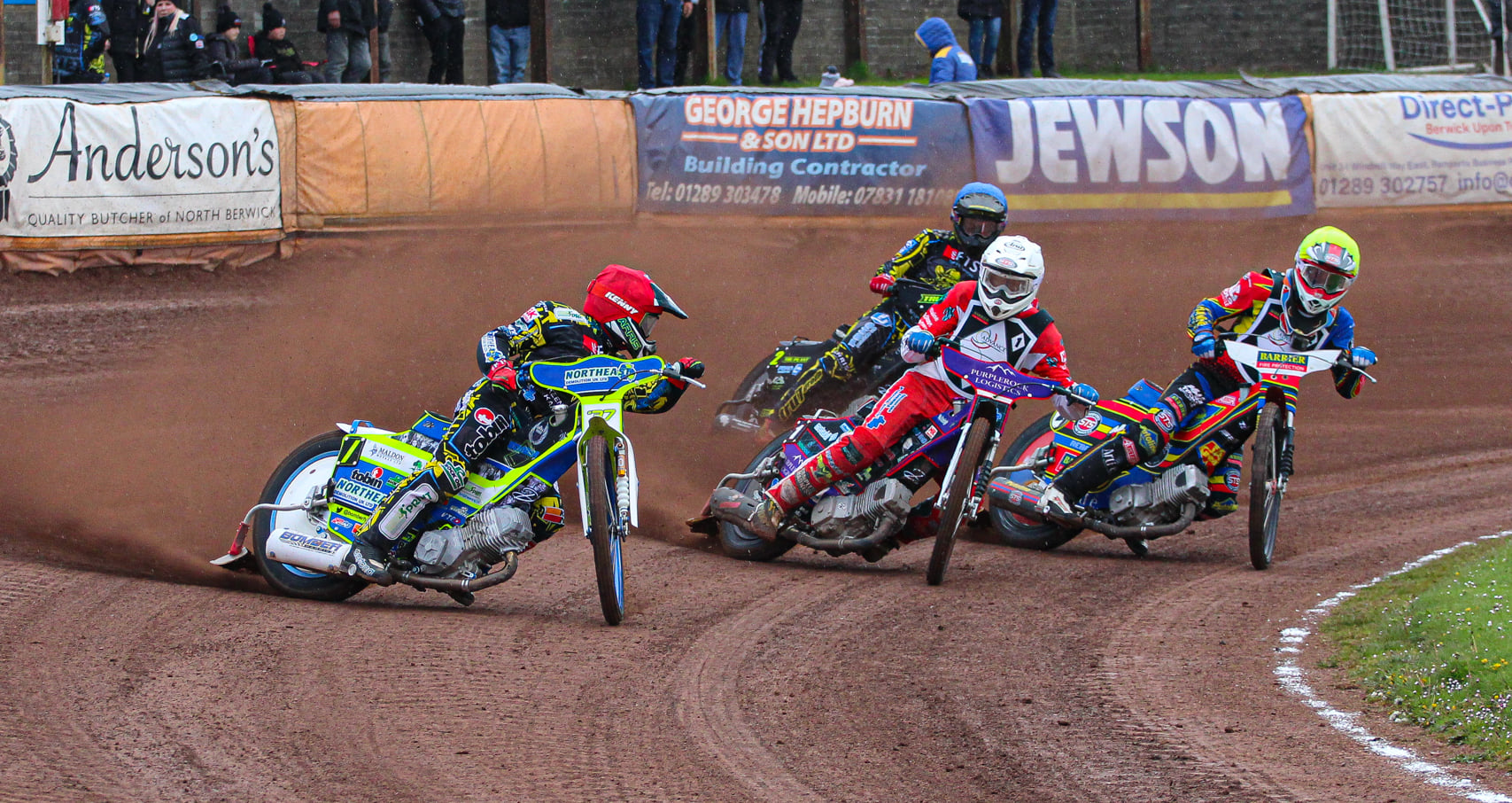