A late change of guest due to the injury to Thomas Jorgensen saw another former Diamond, Tero Aarnio join the travelling Newcastle Diamonds at the Leicester Lions last night in Championship action. Aarnio was in for the injured Ben Barker with rider-replacement covering Adam Ronon’s injury absence.

The Lions took the initial lead in the opening race after a good gate from Nick Morris gave him the three points over Aarnio who had quickly passed Lion’s guest Tom Brennan for second place in the 4-2, however the following two heats were home maximums, Heat Two won by Dan Thompson, soon to be joined by twin Joe after he passed James Wright on the second lap while Kyle Howarth took the third, joined by Brennan after a decent battle with Max Clegg taking the score to 14-4.

The onslaught was relentless early on with Heat Four producing a third straight home 5-1 from Ryan Douglas and Joe Thompson comfortably holding Matthew Wethers and Jack Parkinson-Blackburn at the rear to put the Lions 14 points ahead, which extended to 16 after Heat Five’s 4-2, Howarth taking another straightforward win over Aarnio.

The first share of the points came in the sixth when Aarnio, in as a tactical substitute for Wright took the win well ahead of the fast-chasing Morris, but with Joe Thompson holding Wethers at the back it was only a 3-3, the score now a concerning 26-10 to Leicester before Clegg took an excellent victory in the seventh over Douglas but Connor Mountain, who had been in third lost control and fell on the third lap, turning the 2-4 into a share, while Howarth took Heat Eight, but behind both Mountain and Wright moved well to keep Joe Thompson at the back, with the score now 32-16 as the Diamonds looked to be getting to grips with the Leicester circuit.

The 5-1s were back unfortunately for Newcastle in Heat 10 which was a brilliant race, won well by Morris, but behind Dan Thompson, Clegg and Mountain had an epic battle for the minor placings, Joe Thompson taking second over Mountain on the final bend, but with the score disastrously sitting at 41-19, any hope of a win for Newcastle was long-gone, with only a damage limitation exercise left for the beleaguered Diamonds.

The 11th saw Joe Thompson take advantage of an Aarnio error, and despite a good recovery Aarnio was stuck in last in the 4-2, Howarth took his fifth win of the night in Heat 12’s 4-2 over Mountain, while Heat 13 was won by Morris after a fine challenge from Aarnio in another 4-2 and to add insult to injury the final two heats ended up 10-2 against the Diamonds ending the night to forget at 63-27.

Team manager Nigel Hinchliffe said: “This wasn’t good in any way, shape or form tonight, and Leicester just took control and took us apart systematically and far too effectively. We know we’re better than this tonight and we will bounce back, pretty darn quickly.” 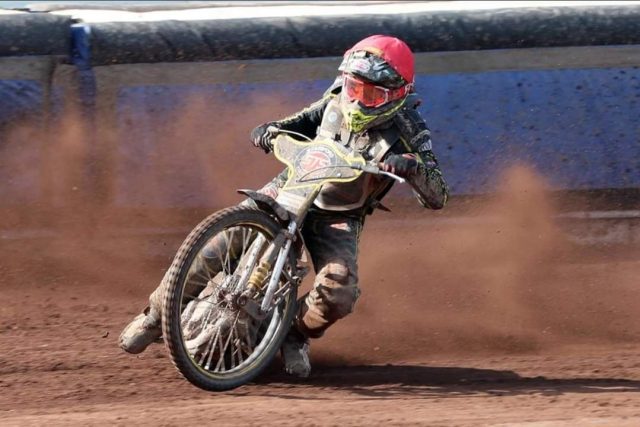 previous
All change at Number One!
next
Barker Returns!