Newcastle Diamonds’ new heat-leader, Team GB international, Ben Barker is desperately keen to get his teeth into the forthcoming Championship season, his first on Tyneside at Brough Park with Newcastle, and one which the sport’s authorities are optimistic for a May beginning, but he’s hoping for more on-track action in the UK as well.

It’s a surprise to many that as yet, Speedway’s upper echelon of racing, the Premiership, has yet to knock on Barkler’s door, and it’s not through lack of enthusiasm of the rider himself.

Club owner, Rob Grant said: “Ben is a great rider and increasingly thrives on gaining more and more on-track action, so any Premiership team that takes him on knows they’re in for a guy who tries his hardest all race, every race for his points and always adds bags of thrills into a night’s entertainment, so we’re helping him put himself in the Premiership shop window as he’s keen to get a top-tier gig to go alongside his Diamonds’ commitments.” 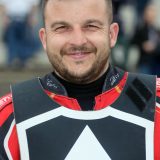